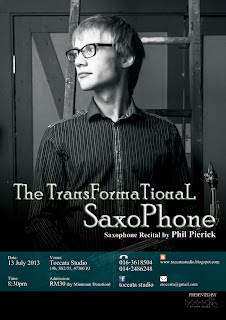 THE TRANSFORMATIONAL SAXOPHONE -  a saxophone recital by Phil Pierick

"The Transformational Saxophone" a saxophone recital will be held on July 13, 8:30pm at Toccata Studio at 19B, SS2/55, Petaling Jaya. Saxophonist Phil Pierick will bring to audiences some saxophone music ranging from classic to modern.

As a staunch advocate for new music, saxophonist Phil Pierick has commissioned more than a dozen new works and has presented premieres in France, Scotland, Canada, Thailand, Malaysia, Singapore, and the United States. An active recording artist, Phil’s recent projects include an album of previously unreleased chamber music for saxophone by Percy Grainger and Invisible Seams, a forthcoming album of new works written specifically for his saxophone duo, Ogni Suono.

Ogni Suono is committed to expanding and promoting repertoire for the medium. The duo has conducted workshops for young saxophonists in Chicago, Malaysia, and Thailand and community outreach programs in Iowa City, Iowa (USA) as winner of a 2012-2013 Yamaha-in-Residence Fellowship.

Phil is a three-time prizewinner at the MTNA National Young Artist and Chamber Music Competitions (2012, 2011, 2009), took third prize in the 2012 ISSAC International Saxophone competition, was named Vandoren Emerging Artist of 2011, and won the University of Illinois Concerto Competition in 2012. As national winner of the 2009 Frank Huntington Beebe Fund for Musicians, Phil studied with Jean-Michel Goury in Paris at the Conservatoire à rayonnement régional de Boulogne-Billancourt.

Phil currently teaches as undergraduate saxophone quartet coach at Eastman School of Music, where he is a doctoral candidate under the direction of Chien-Kwan Lin. Phil holds Bachelor and Master of Music degrees from the University of Illinois at Urbana-Champaign, where he studied with Debra Richtmeyer and held the position of saxophone teaching assistant.
Posted by toccata at 20:23