Creative synergy on THE EDGE by Elaine

http://www.theedgemalaysia.com/lifestyle/231224-creative-synergy.html#.US8CqbLuJw0.email have a look! we are on THE EDGE! =D
Posted by toccata at 23:08 No comments: 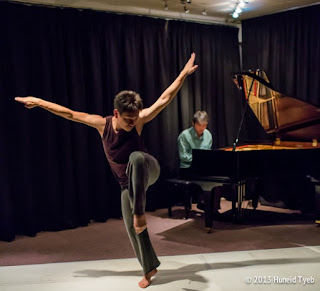 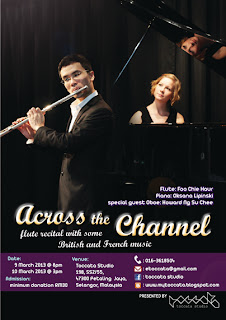 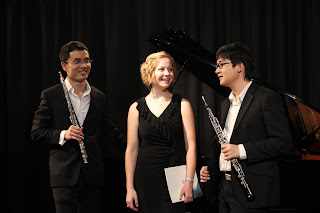 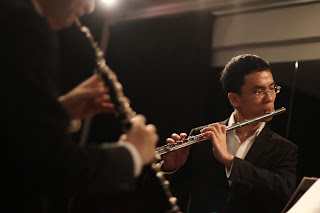 "Across the Channel" a flute recital will be held on March 9, 8pm and March 10, 3pm at the Toccata Studio at 19B, SS2/55, Petaling Jaya. Flutist Foo Chie Haur and pianist Oksana Lipinski will bring to the audience British and French flute music ranging from Charles Nicholson to Francis Poulenc. Special guest player Oboist Howard Ng Su Chee will join in for Madeleine Dring piece, Trio for Flute, Oboe and Piano.

Flutist Foo Chie Haur started playing the flute at the age of 17. He has studied with Trevor Wye, Hristo Dobrinov, Yukako Yamamoto and Sofia Cosme. He is currently principal flutist with National Symphony Orchestra. His musical endeavors has brought him to WASBE International Youth Wind Orchestra in Singapore, Canton International Summer Music Academy in Guangzhou, China, as well as tours to major Asian cities with Asian Youth Orchestra. He has also performed with Malaysian Philharmonic Orchestra and Macau Orchestra. He also involved with Dama Orchestra where he had the chance to perform in various local theatre productions. Besides holding Fellowship (FTCL) Recital Diploma of Trinity Guildhall, Chie Haur also holds a Bachelor Degree in Science.Pianist Oksana Lipinski’s affection for the piano began in Germany at the age of 8, where she showed great musical talent and passion. She continued to develop over her childhood years, frequently taking part in national competitions such as “Jugend Musiziert,” winning first prize 4 years running, and the “Karel Kunc competition,” again winning first prize, which culminated in being selected as the soloist for the City Orchestra during their tour of Hungary. She earned her BMus (piano) at the Royal Welsh College of Music and Drama, Cardiff. She also continued to show her performance abilities by winning the Eric Hodge Memorial Competition. She is currently using her passion for music and piano to teach others in Kuala Lumpur and has specialised her playing to become a sought after chamber musician and accompanist.

"From the Heart" features Fung Chern Hwei on the violin and Justin Lim on the piano. Together, they bring us chamber jazz tunes as featured in Fung's debut album "From the Heart" (2010).

A purely acoustic performance with jazzy improvisational skills involve. come join us for a magical evening this chinese new year! 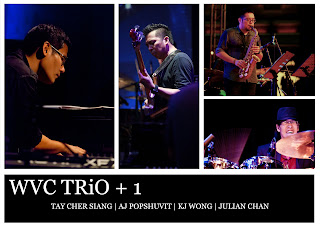 Drawing inspiration from the many facets of modern life, influenced by Malaysian and other Asian cultures, the music of WVC TRiO +1 cuts across many musical genres and defies any kind of classification. Tunes such as “The Art of the Wind Up Alarm Clock”, “Found and Lost”, “Standing in the Rain on Euclid Avenue” tries to examine and express the human condition in modern life, using the artform known as "jazz" as its stylistic musical vehicle.
Formed in 2006 as a trio, WVC TRiO +1 completed its quartet line up with the addition of saxophonist Julian Chan. The group has toured extensively in the region, heralding back the spirit being "on the road" of touring jazz bands of old. Through these regional tours, WVC TRiO +1 has brought its music to many corners of Malaysia, Singapore, China, Taiwan, Thailand, and Macao. In one of these tours, the quartet managed to travel extensively over 18 cities within a month, using different means of transportation, playing in many different types of venues.
WVC TRiO +1 has three instrumental albums - “WVC TRiO” (2008), “ELEVEN” (2009), “In the Dark, I See Her” (2011) - that explored different musical genres (while maintaining the spirit of jazz as its core) and combinations in its line-up. Most of the tunes recorded are original tunes written by the band members. In addition, the band also experiments with transforming unlikely pop tunes, Chinese classics, and many mainstream music into new jazz re-arrangements, in the spirit of the great jazz musicians of old.
WVC TRiO +1 has been invited to appear in many festivals in the region such as Taichung Jazz Festival, Kota Kinabalu Jazz Festival, Phuket International Jazz Festival, Tianjin International Jazz Fest, Macao International Jazz Week and many others. In addition, the band has played extensively in the Malaysian local jazz clubs, from No Black Tie, Nero Fico, (the now defunct) Venue, and many others.
The present incarnation of the WVC Trio + 1 consists of bandleader/composer/arranger/music director/pianist Tay Cher Siang, bassist AJ, drummer KJ Wong and saxophonist Julian Chan. The band remains one of the most active units in the Malaysian performance circuit and is one of the most sought after bands in Malaysia for Hi-Fi recordings and live performances.